To Russia, the return of Choices East

Over 25 years ago, a 35-year-old woman walked through the doors of Choices for her 36th abortion. She was from Russia where it was commonplace for women to have abortions in the double digits. Like so many other Russian women, she was extremely opposed to using birth control because her doctor taught her that the Pill was far more dangerous than repeat abortions and other forms of contraception were practically unavailable.

After meeting her I found myself fantasizing about going to Russia to take on their brutal system of sexual oppression that women were subjected to. My fantasies became a reality when I met two Russian
feminist publishers visiting New York. They were astonished by my philosophy of informed medical consumerism and Patient Power.

Two weeks after they returned home I received an official invitation to lead a team of physicians and counselors from Choices to Moscow for an educational exchange. Three months later I was on a
plane to Russia accompanied by nine of my staff, carrying visions of being a pioneer and of changing their world. 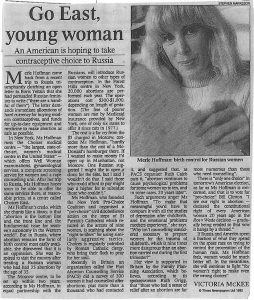 Merle Hoffman travels to Russia to talk about women’s health

While there, I learned that there were practically no pregnancy tests available in Russia; many women didn’t find out they were pregnant until they were well within their second trimester. In order to receive a state-sponsored abortion at no cost, women needed the approval of three physicians, including a psychiatrist. This bureaucracy led many women to opt for “clandestine abortions,” done in their homes by state gynecologists eager to earn extra money. These unsanitary and dangerous conditions resulted in many teenagers and young women becoming sterile.

I keynoted an Educational Symposium where I spoke of how reproductive freedom must be the bottom line of women’s autonomy. My staff and I made history by bringing state-of-the-art abortion technology and birth control to the state teaching hospital. About 25 students of anesthesia, gynecology residents and administrative staff hovered around the operating room tables as Choices physicians demonstrated how to use the technology.

Towards the end of my trip, I met with 15 feminists to speak and share information at a “Feminist Round Table.” Out of our intense conversations we developed a strong letter to Boris Yeltsin demanding adequate reproductive health care for Russian Women. Inga Grebesheva, famous for being the “only woman deputy” of the Central Committee of the Communist Party delivered the letter to Boris Yeltsin. No reply was ever received.

Since my trip, some headway has been made in the realm of reproductive rights and health. At the same time, Russia is experiencing restrictive abortion legislation inspired by rhetoric all too familiar in the United States. Russian women continue to experience domestic violence at epidemic rates, and there is much room for improvement in access and education on contraceptive care. Needless to say, I’m due for a visit.

I am filled with anticipation and excitement to be going back to Moscow to learn, speak, organize and create real and needed change. On this trip, the Choices Global Health Institute of Healing and Education, a nonprofit foundation, put link is teaming up with put linkProject Kesher Russia to make women’s healthcare in Russia more responsive to the needs of women, particularly in the areas of domestic violence and reproductive health care.

I’ll be joined on my journey by a delegation of activists and educators and together we will meet with various officials and grassroots groups. One such Russian activist is Alena Popova, a former journalist now training to be a lawyer and co-founder of The W Project. Popova and The W Project draft domestic violence law, campaign for equal pay, and stuff political representative’s mailboxes with photographs of battered women to raise awareness of domestic violence. Russian women outnumber men by more than 12 million and they experience domestic violence at epidemic rates. Domestic violence can be physical, psychological, sexual, emotional or financial and always involves power and control.

I will begin my trip by meeting with the Health Advisory Committee. The following day I’ll join more than 100 feminist activists who work tirelessly on a variety of pressing issues.

During the latter half of my trip, I will be attending a two day General Women’s Conference. The topics covered at the conference will range from motherhood and childcare, medicine and psychology, fighting violence and supporting victims, women’s entrepreneurship and more.

I’m filled with excitement and anticipation to be going back to Moscow to build on the work we began years ago. I plan to learn, inspire, catalyze activism and exchange a wealth of ideas.